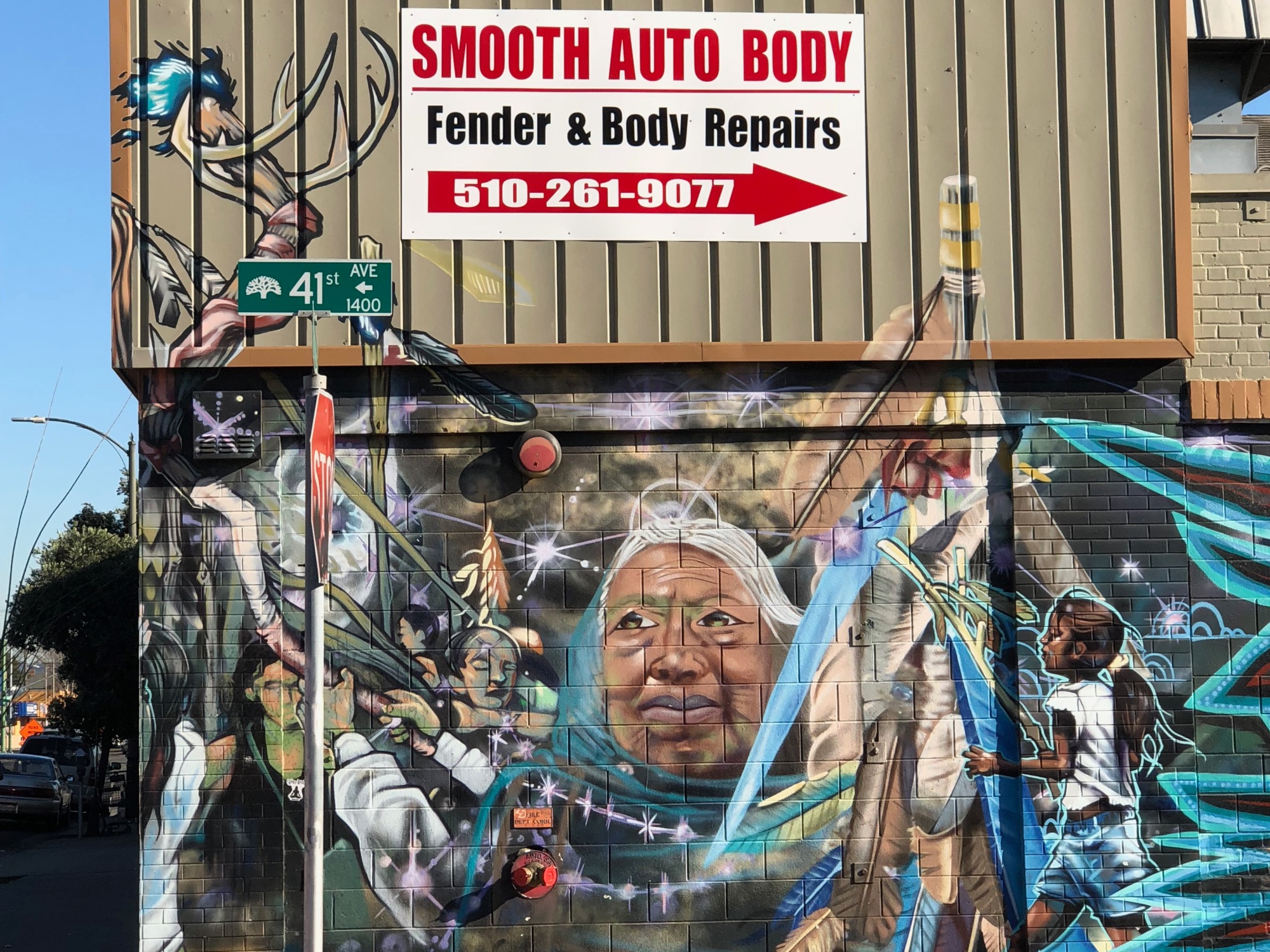 A few years ago, I walked the length of San Pablo Ave in the East Bay. It was  a fairly ridiculous endeavor, a walk done over 2 days that covered 23 miles . The starting point for the walk was downtown Oakland, and , as Oakland has a loosely radial plan, this represented one “spoke ” from the center. This amble returned to that theme, and traverses a second of those spokes, one that heads southeast from City Center, International Boulevard, or as it used to be known , East 14th Street.

Here is the route:

So first I suppose, a word about the name International Boulevard. The street had been known as East 14th until 1996, when it was formally changed to East 14th. Many still refer to it as East14th, and there is a movement afoot to change it back. It was so named because of the ethnic diversity in the area.

East 14th bisects many lower to middle income neighborhoods in Oakland- largely black neighborhoods from the Coliseum area south and east,  heavily Latino neighborhoods around Fruitvale, and as one approached downtown, an Asian neighborhood, primarily Vietnamese, a place of more recent arrivals.

It’s a street that fronts many blocks of low slung industrial buildings, with small modest California bungalows scattered amongst them. This is the industrial workhorse for the Bay Area, a place of light manufacturing, scrap yards, auto repair and shipping. It is also an area of strip centers featuring all manner of food from around the world. And too, it is populated with the odd landmark, robust commercial structures that reflect the area’s past, and perhaps, a role in its future. The urbanism here is one seen often in cities , at times ragged to be sure, but I think often under appreciated  for its delightful unplanned moments. These areas have an “as found” quality borne out of the specific needs of commerce in particular- signage and display specifically. Additionally, these less pretentious environs often become tabula rasa for community expressions- murals and graffiti come to mind. The writer and former colleague John  Chase, along with Margaret Crawford coined an expression “Everyday Urbanism”, and a book of the same name. So East 14th- a walk through Everyday Urbanism.

Walking the streets on this blog, as I have the past 10 years, gives one  a unique perspective not gotten from a vehicle. But, the vehicle is the primary and means of transportation here.  What struck me on this walk on a sunny Friday afternoon in particular, was not the sight of traffic but the sound. Particularly the sound of music.  The light would turn red,  cars would pile up, and a deep bass beat  would fill the air. Mostly rap, some loud enough to shake the ground. This boulevard has a soundtrack. You’ll have to use your imagination, I could not capture it on my phone, but it was amazing. The National discount store served as a backdrop for this intersection’s audio performance. 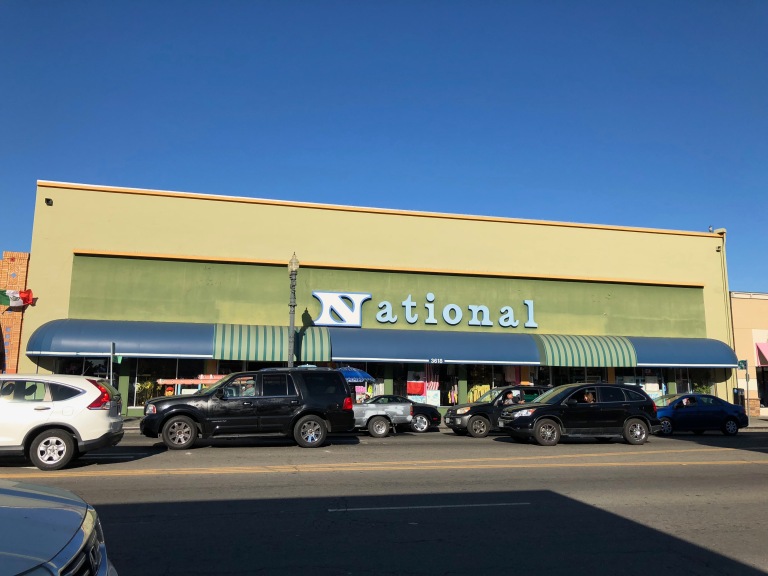 Walking , the Boulevard, like may streets of this sort, has  a rhythm , blocks and blocks of strip centers, interrupted by an occasional landmark, generally a point of vertical emphasis. In the car, the strip centers fly by in an unremarkable blur. But on foot, they offer up a fascinating mashup up of offerings,- color, signage, graffiti, mannequins. 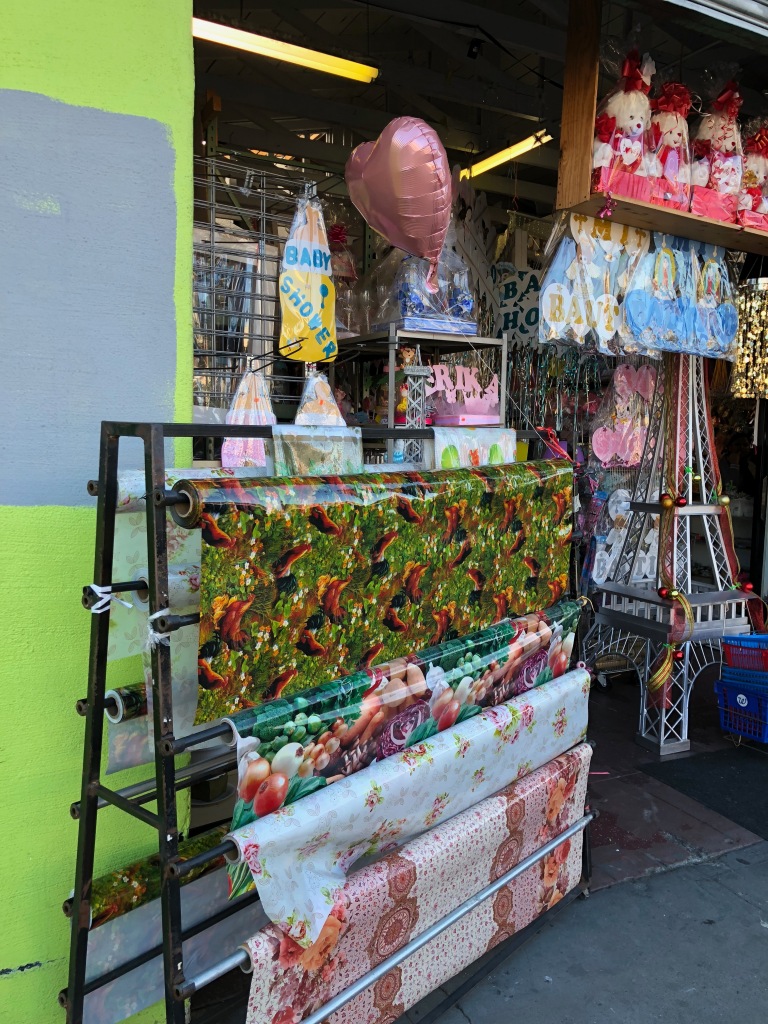 Periodically, substantive older buildings, this once a bank, are repurposed:

And then there was this: 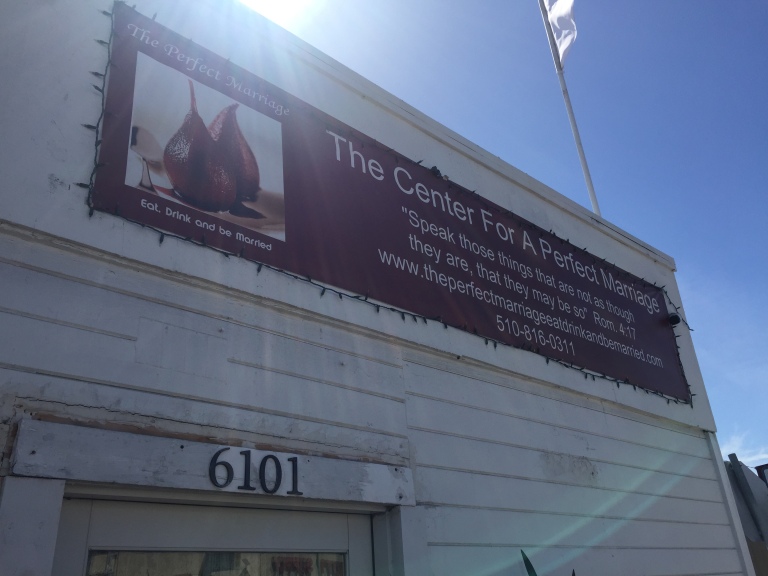 I was disappointed that the “Center For A Perfect Marriage ” was closed on this day. Not that my own marriage isn’t perfect, buy ya’ know, you can always learn something new.  I was also  struck by this scene, a liquor store that offered up both a billboard to the favorite local team, as well as , rather inexplicably, an advertisement extolling the virtue of the uber-exclusive Vichy Springs Resort. Did they get a lot of business from this neighborhood? I imagined the A’s, and definitely the Raiders did, but…..who knows.

The auto and auto related businesses do predominate here, and there is much work , not just to repair, but to elevate (in some cases literally) cars to a higher plane. 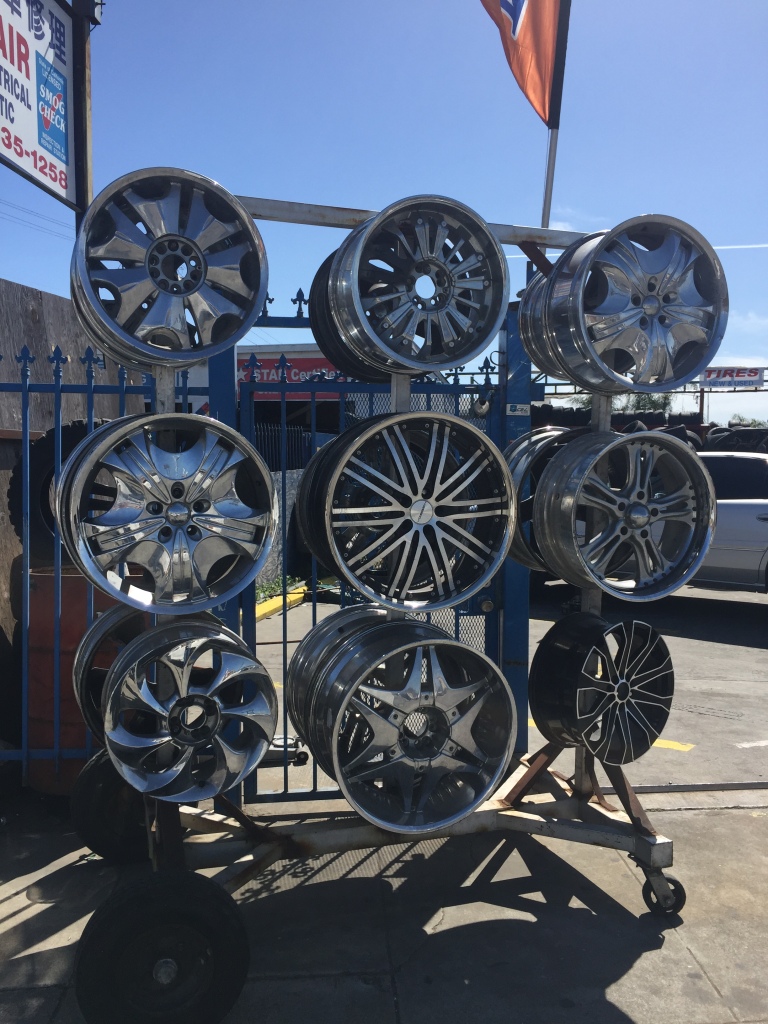 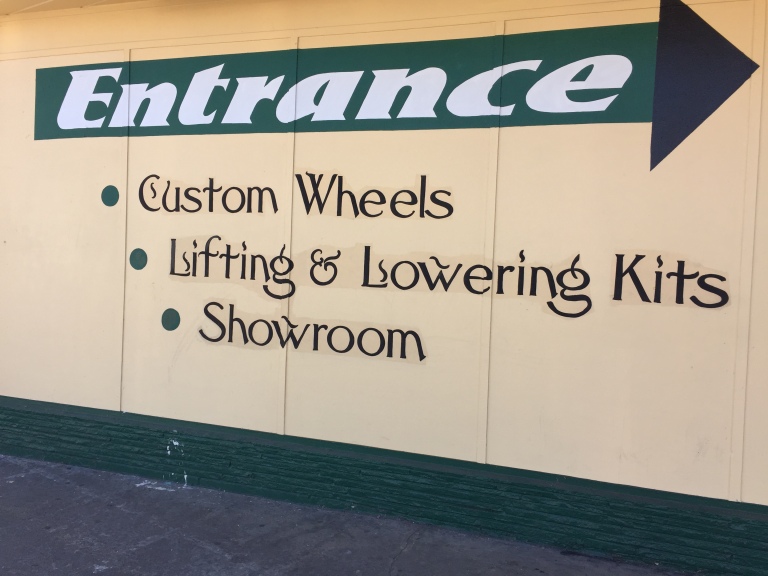 But that is not the only mode of transportation on the boulevard. People do bike on the boulevard, and for example, I witnessed these commuters and their starch shirts !

And of course, there are pedestrians. In areas outside of the commercial nodes, the these walkers are all business, gathering cans, or hauling fruit. 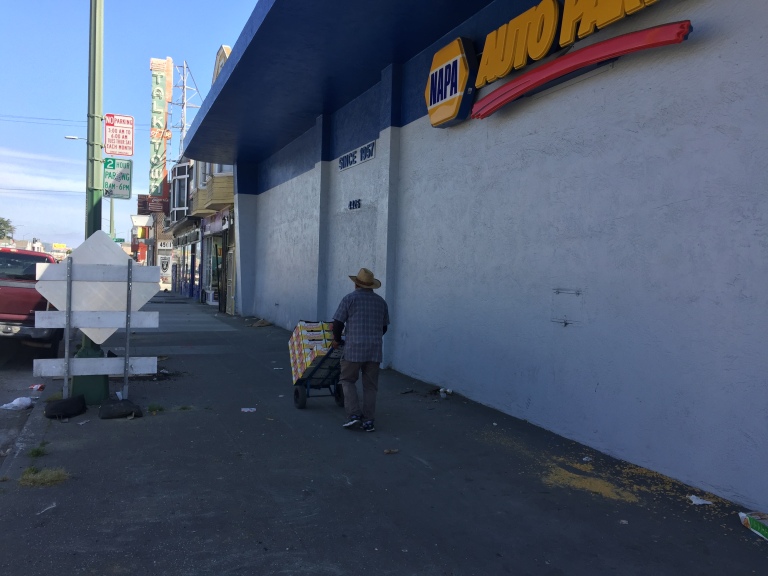 Finally, there is another type of pedestrian who has plied this street for years. From what I understand, the street is quite active for these ladies in some stretches, an ideal roadside business I suppose. I don’t mean to make light of this, with this an area of new arrivals, there has been a lot of exploitation here.

Periodically along East 14th, the run of strip centers and auto repair shops are interrupted by landmarks; singular buildings that generally have height, though not always.  The first of these I came to is the old Mutual Stores Building, at 58th. This building really stands out, a red brick Renaissance Baroque structure, another repurposed now as a discount furniture outlet. It’s history is another immigrant story, in this case, a Danish immigrant who founded the concept of cash and carry grocery, as opposed to delivery groceries, much more common back in the 20s. Originally called the Danish Creamery Company, cows adorn the tower, and you can see the “Mutual” in terra cotta. His chain of stores eventually were bought, and became, Safeway. It eventually became the Safeway headquarters for a period. It towers over the neighborhood.

Churches are another landmark seen along the Boulevard,, I was struck by this pairing, one a classic Spanish Baroque cathedral- St . Elizabeth’s another a quirky mid-century modern church.

Another set of landmarks are old office structures, whose scale again sets them apart, and create a momentary “node”. I was particularly taken with this gothic inspired “Medico-Dental” structure near Fruitvale. Often found gothic an appropriate stylistic choice for Medico-Dental, just not sure why. 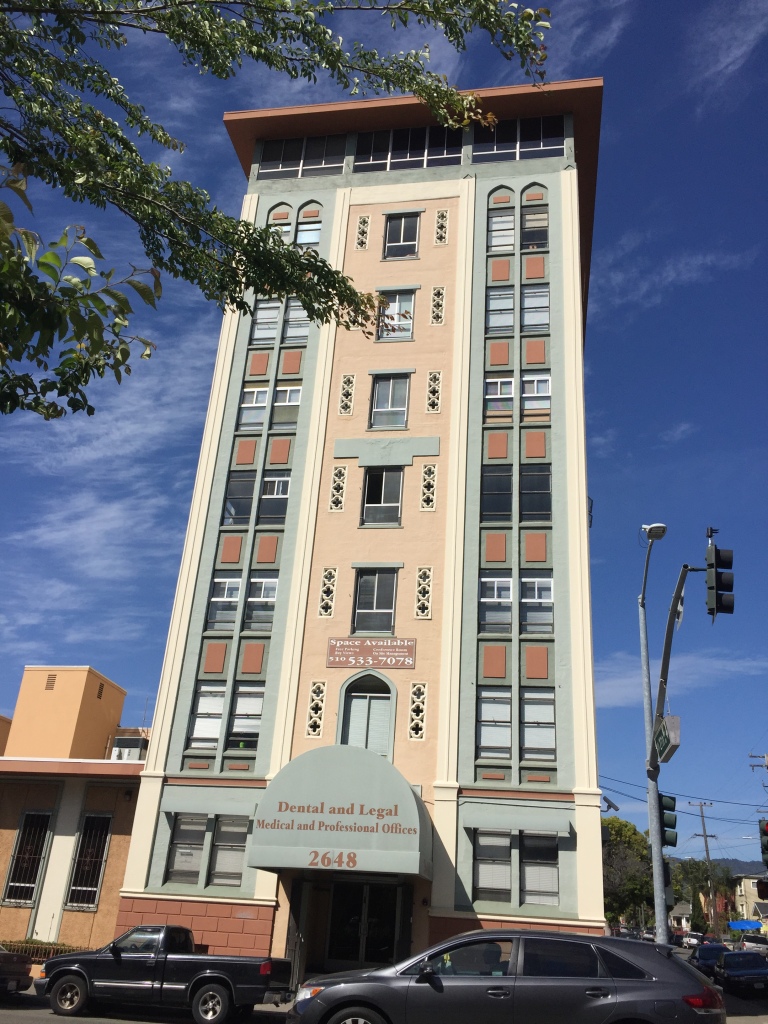 And finally, there is the buzz around Fruitvale BART station, where transit comes to a hub, the smells of cooked meats come from the many taquerias, and pedestrians jostle for space with more mannequins. 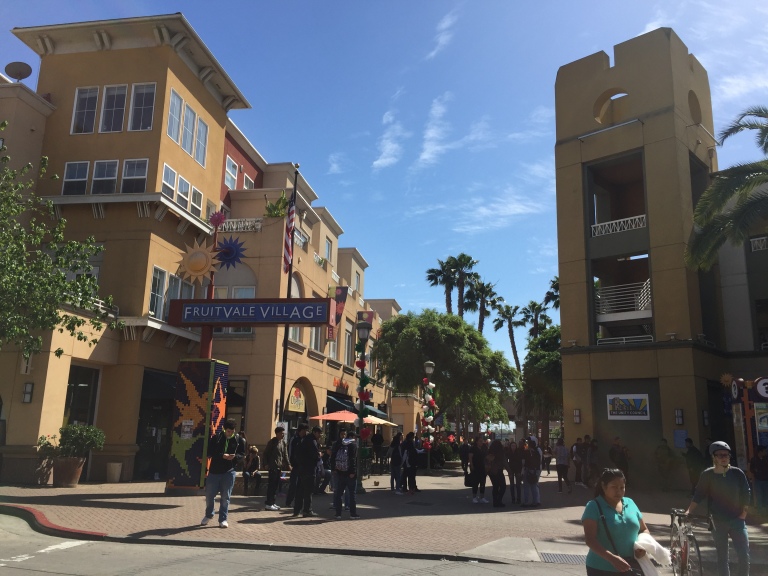 Ah, yes, about those cooked meats. This is not a food blog, but no trip down this street would be complete without at least an acknowledgment of the amazing food offerings- the Fruitvale food trucks are legendary, the Pho in the San Antonio neighborhood closer to downtown sublime. Urban Ambles chowed on some terrific carnitas street tacos  during the afternoon. 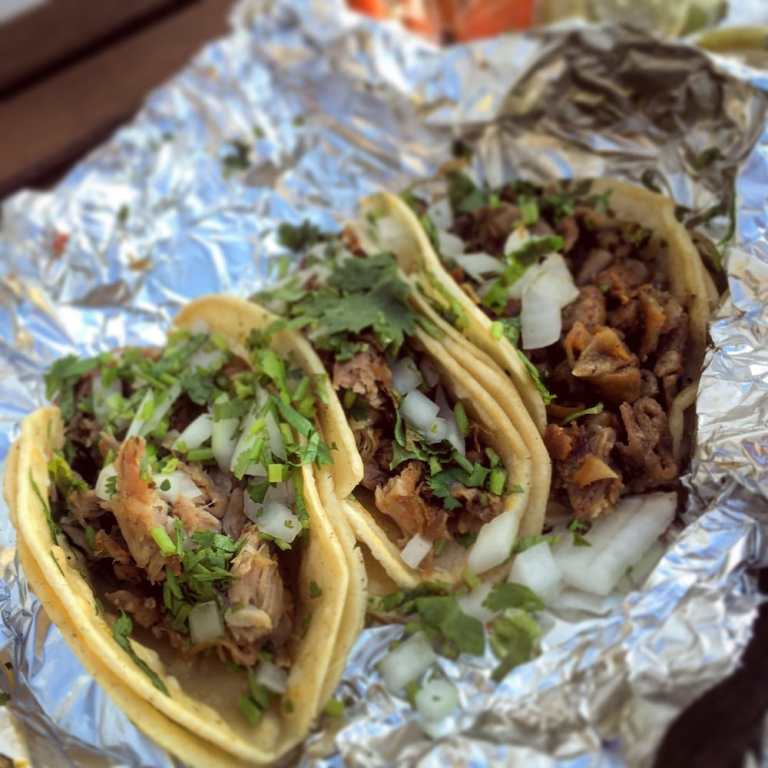 This street is a lifeblood for East Oakland , and its character comes almost wholly from those who have arrived more recently. In the insanely expensive Bay Area, the environs offer slightly more reasonably priced offerings, such as this food , but also clothing , community services , and as much as is possible, housing . It is the heart and soul of the East Bay Latino community, the Vietnamese community, and includes a robust artist community. I imagined how at home the recent arrival might feel among these streets.

It has also for years been a favorite haven for artists. This last bit I was reminded of grimly , as , just a few blocks from Fruitvale BART, I regarded the shell of the GhostShip building , where 36 people lost heir lives in an inferno in 2016. A tragic memorial , and an impossible not to hear warning that so many have to settle for  outright unsafe places to dwell just to get by here.

A bit shaken,  I carried on with the remainder of my walk , heading to downtown Oakland, and home.

As I got back to downtown Oakland, I recalled that I had started this  walk fresh off a morning at work. The day’s and week’s events were still bouncing around in my head, still getting work emails,  I clearly wasn’t “present” as they say. But slowly, I did become present, captivated by the vibrancy here, the senses assaulted, as they often are on these walks.   Urbanism is a somewhat messy stew, and it sometimes lacks an obvious beauty, but on foot I find, it reveals itself on its own terms, as this Boulevard did, through color, through sound , through  smell, through the unplanned, through the odd confluences.

In the end, Everyday Urbanism is not concerned with aesthetics but with specific activities of the daily life. And this street offered that abject lesson, and above all, a reminder that perhaps the greatest thing about this country is we are all from somewhere else, whether here for 200 years, or 2 months.  In this repugnant political season, the reminder of that beauty, taken in full measure on this walk, made it a day well spent.