Part 5 in the the Bay circumambulation is a bit of detour inland, to Stanford. I have never really walked around this campus much, though I did a bit of work there  a number of years ago. The campus is studded with buildings by rock-star architects, but  the original quad is the most compelling part of the campus. The trip also included a visit, and tour, of Frank Lloyd Wright’s Hanna House nearby. I’ll write about that later on. It was about a 5 mile saunter, down and back from San Francisco on Caltrain. Here’s the route: 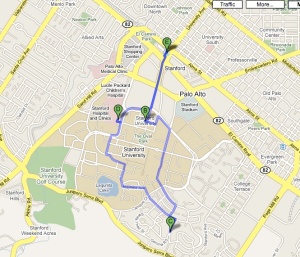 First, a bit of background on Stanford.  Stanford was founded by railroad kingpin Leland Stanford, and named the school in honor of his only child, Leland Jr, who died of typhoid at a young age. The campus owns over 8,000 acres, making it the largest campus in the world in terms of contiguous land.  The initial conceptual planning was done by famed landscape architect Frederick Law Olmstead (of Central Park fame, among others). The University began accepting students in 1891, with the inner quadrangle completed (almost) for the opening. The quadrangle is rendered in the Mission Revival style; golden sandstone, muscular arches, deeply recessed windows, and red tile roofs. It establishes the character for the rest of the campus.

Stanford was on break the week I was there ( at least I assume so- it was a gorgeous day and no one was around- maybe a vastly more studious bunch than I imagined). As a result, this part of the campus felt extra Mission-y, one could imagine oneself living the monk’s life, quietly contemplating the deeper questions of life in the cool shaded arcades. On a depopulated day like this, the experience was memorable.

One of the challenges with a campus that has a very clearly defined(re:limiting) vocabularly, is how to add to it. A walk through the campus reveals the challenge of this, both the successes and failures, even for Star-chitects. Here’s Sir Norman Foster’s (they don’t mess around at Stanford) 2003 Biomedical Sciences Building; my favorite- a sinuous glassy u with offices and classrooms opening to the court on the inside, 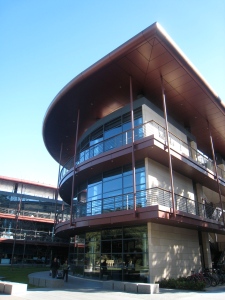 ,yet respectful of the campus rhythyms on the outside. One great thing about pristine glassy school buildings where students and profs work and teach, is all the interesting ‘lived-in’crap that ends up at the expensive glass facades; stuffed animals, pizza boxes, even skeletons.