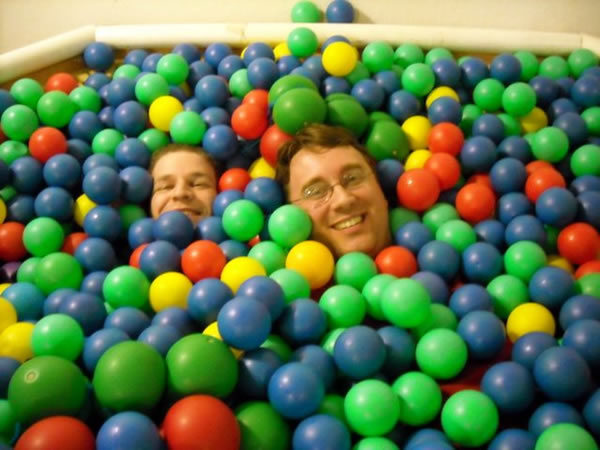 A couple of months ago, I set out on my latest “Grand Tour” Amble. But this was no ordinary amble, no this felt more like a journey to the center of the earth. For on this day I was traveling to Google’s world headquarters, or as it has come to be known, the “Googleplex”. Here’s the route, and as always, it was accessed via public transit, in this case, via CalTrain’s San Antonio station, and included a sojourn out to nearby Shoreline Park. Here’s the 5-milish route, and, of course, courtesy of Google ™

As you might imagine, in these parts, walking through this suburban neighborhood to get there can generally range from bland to grim to inhospitable, and that was the case most of the way, though there were sidewalks at least:

I was really not sure what was waiting for me. I knew the Googleplex was some kind of campus. The notion of the suburban corporate campus is a relatively recent one in the grand arc of building design, really taking off in the 1950’s. One of the prime examples was Eero Saarinen’s General Motors Technical Center outside Detroit. Of course, in the hands of the 1950’s modernist, the campus was meant to embody the promise of the corporation, expressed in a pristine modern language, with every detail reinforcing the whole. 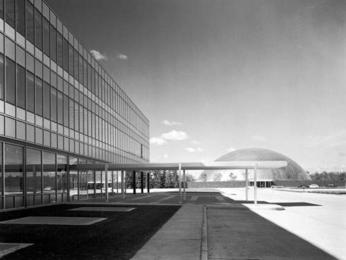 But the champion of  every detail re-enforcing the whole was Frank Lloyd Wright. Mr. Wright often insisted, and was often given the chance, to design everything down to  the napkin holders. His most noteworthy shot at the corporate campus was the Johnson Wax Building, with its infamous wax-like interior columns:

But of course, that was the 50’s. Its a different world, not to mention this is laid back Silicon Valley, and Google. I wondered, was there security? Was it gated?  Was it more of a collegiate campus, a “traditionally bland office park”, or a new model, an emerald city on the hill, pointing us all in a new direction, whilst embodying the company’s internet ingenuity.

I was not sure where the ‘campus’ began, or when I had entered its hallowed grounds, but suddenly two people whooshed past me- and not in a car, but on bikes, painted suspiciously with Google’s telltale rainbow. Then I saw a sign, then another, and that was it, I apparently, had arrived. I was underwhelmed- it did as it turns out have the styling of a very bland 80’s office park. In fact, here is it what it looks like from the air , and of course, courtesy of GoogleMaps  ™:-/ :

The only real hint that this might be a bit different than your run of the mill office park were the bikes. But I intended to venture in , look inside if I could. Again, I wasn’t sure what to expect, but when I thought about what I might find, I couldn’t shake this image: