During the past year, I have described travels down a single street, and the changes one encounters along the way. We traveled from the bottom of Market Street to the top, and journeyed up Polk Street from one end to the other. I took that up again last week, getting out for a trek along Taylor and Jones Streets. It started amidst the insanity of Mid-Market , shimee-ed up and over Nob and Russian Hills, and then spat us out in a different kind of mayhem; Fisherman’s Wharf. Here’s the  route: 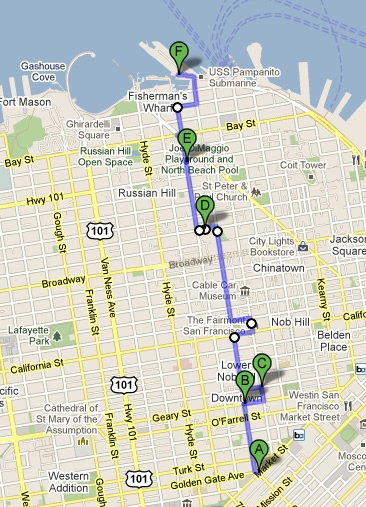 Author’s Note: As some have followed these tours previously, I should caution that the first part of the trip, at least from Market to O’Farrell, should not be taken at night. Also, this walk, about 2.5 miles all told, traverses several hills, including a couple of pretty steep blocks. I’m just sayin’ .

We begin our trip at the confluence of Taylor Street, Market, and 6th Streets, one of the more colorful intersections in our fair city, to say the least. There is much to take in here, a goodly portion of it legally questionable, at a minimum. One of the best places to take this all in is the newly opened ShowDogs on the corner; you can sit in the prow of the building with a fine Porter or Stout and contemplate the madness in front of you. 5 star street theater. Think of it as a bracer for the hike ahead. Taylor Street begins at Market, and in these parts is standard issue Tenderloin, chock-a-block with low-rent fleabag hotels  next to some terrific new affordable housing; and community serving non-profits next to dive bars (also community serving). The sidewalks are usually full with locals walking, talking, and yes, sometime staggering and sleeping.