After a long layoff with the blog, I have some things to say again. More to come, and more frequently !

Among the many changes encountered in moving from San Francisco to West Berkeley a few years back was the extraordinary range of places to buy food. Berkeley is world-famous for its grocery offerings, particularly produce, with the likes of Michael Pollan and Alice Waters plying the aisles of Berkeley Bowl ,Monterey Market, or its downtown farmer’s market  for their extraordinary offerings. I mean Berkeley Bowl has a carrot SECTION. The next tier down, within a short distance, we have the usual lineup of Whole Foods, Andronico’s, and something called Sprouts. Then you have your standard fare Safeway and Trader Joes. And nearly all of these stores are located in shiny new custom designed stores, all built-in the last 10 years. They are designed for the display and selling of food.

But there is one more  tier of stores, the discount grocery. These serve an important function in this neighborhood of mixed incomes-  they offer lower prices. They are heavier on the canned and frozen foods, less produce. They include the just departed  “Grocery Outlet”, offering standard brands at lower prices. Further down the “food chain” is the Dollar Tree, and, finally , in true American fashion of undercutting the competitor (one cent less!), the 99 cent store, right down the street from home. 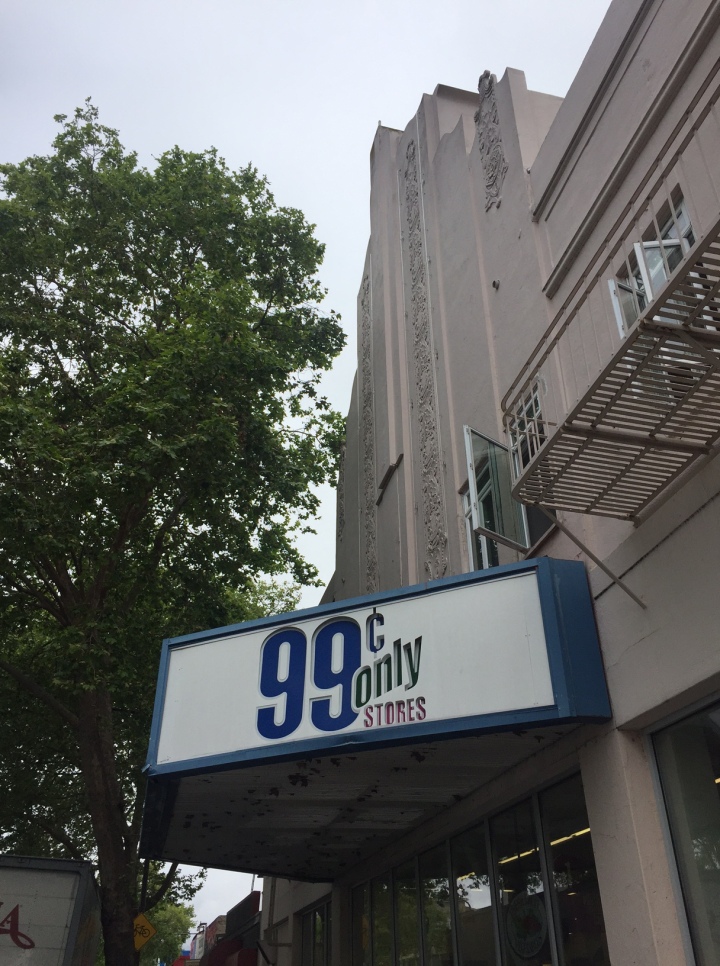 After moving here, I discovered the 99 cent store. I went in, curious like many perhaps, if everything in the store indeed cost 99 cents. It does not, but everything is something.99. There were many recongizable brands and a few new ones: Gambell’s Soup anyone? I was fascinated by this place , but it wasn’t the food offerings so much, it was the building- an old theater.

Unlike the higher priced stores mentioned above, these stores often find their way into spaces not designed to be grocery stores. I had first seen this phenomenon in downtown Oakland, where within the lovingly restored Old Oakland blocks, a series of Victorian commercial buildings are fused together to host a Smart and Final discount grocer. 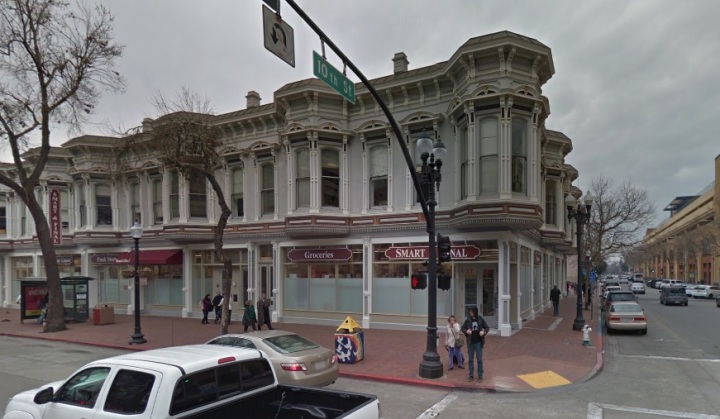 When I lived in San Francisco, there were also several examples of this in my old neighborhood. On Polk Street in San Francisco, my local Walgreen’s sat in a  ponderous mountain of a building – “Maple Hall” . Walgreens occupied the Ground Floor, but up above , frozen in time , sat Maple Hall, the ziggurat seen below: 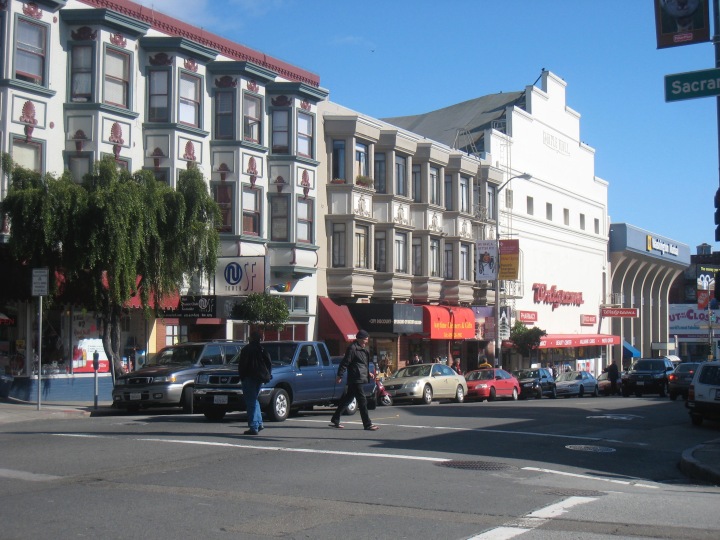 Maple Hall was a dance hall it turns out ,  hosting the likes of JellyRoll Morton, major political rallies, and so on. Now it sits empty, and available. 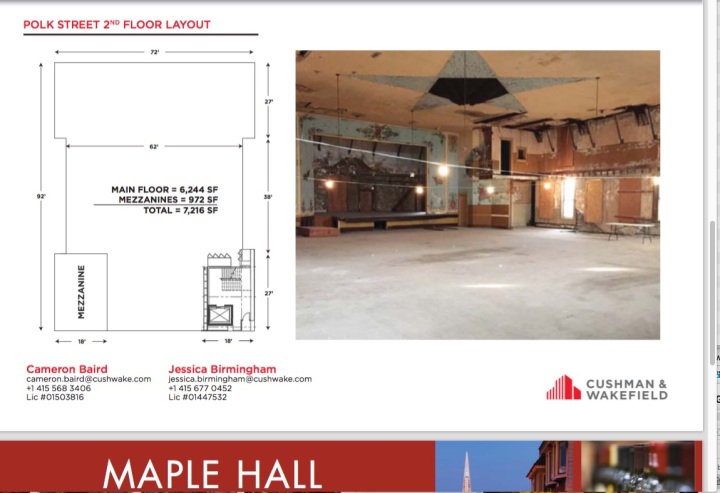 Cities once held many more neighborhood scaled cinemas and performance venues, I suppose a pre-war legacy of  ALL of one’s entertainment being well beyond the palm of your hand or the remote and at the end of your wrist.

The grand-daddy of neighborhhod theater re-use in San Francisco  is the old Alhambra Theater, now a gym. A truly bizarre spectacle: 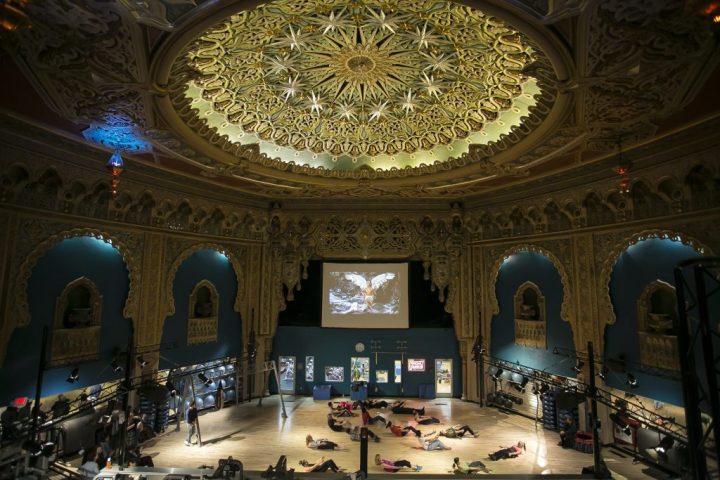 So back to our local 99 cent store, seen here. 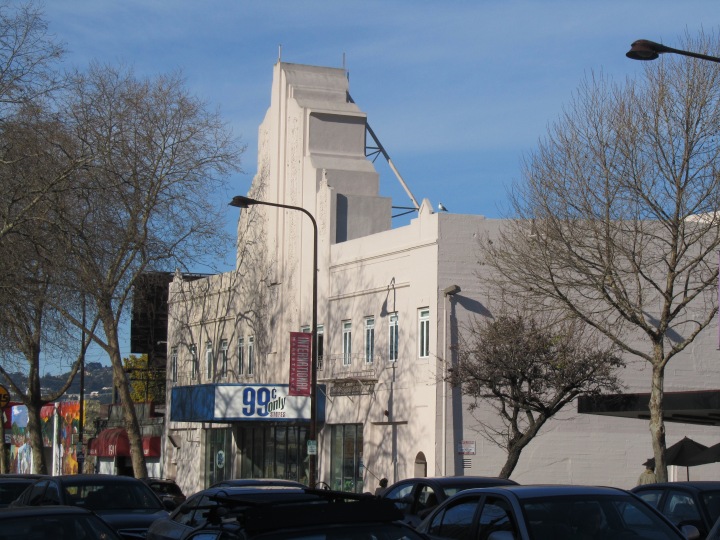 Back in the day , the Rialto was a classic neighborhood movie palace, this grainy historical photo from the Berkeley Historical Archives. 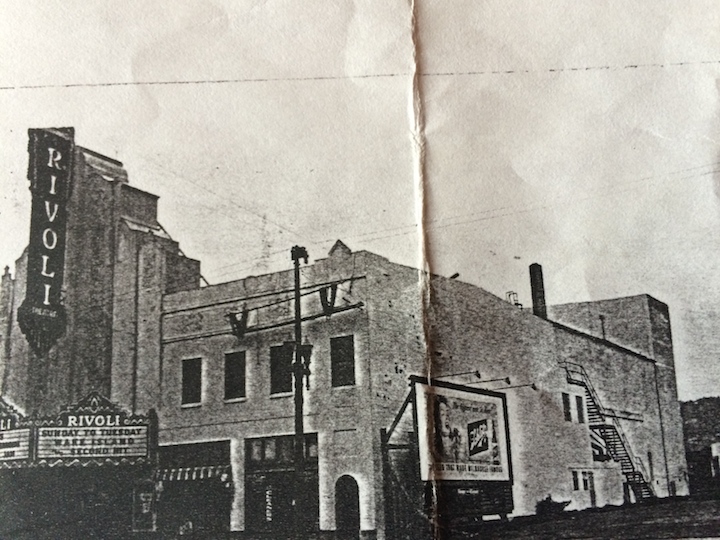 After the theater shuttered, it became , first a drug store, then, yes- a Smart and Final, before morphing again, into its current incarnation as the 99 cent store, as noted on its “marquee”.

And while some of the other interventions mentioned above had a bigger budget, for my money, they are no match for the entertainment value of the 99 cent store. For high above the sand pails and tostadas , looms the old theater. 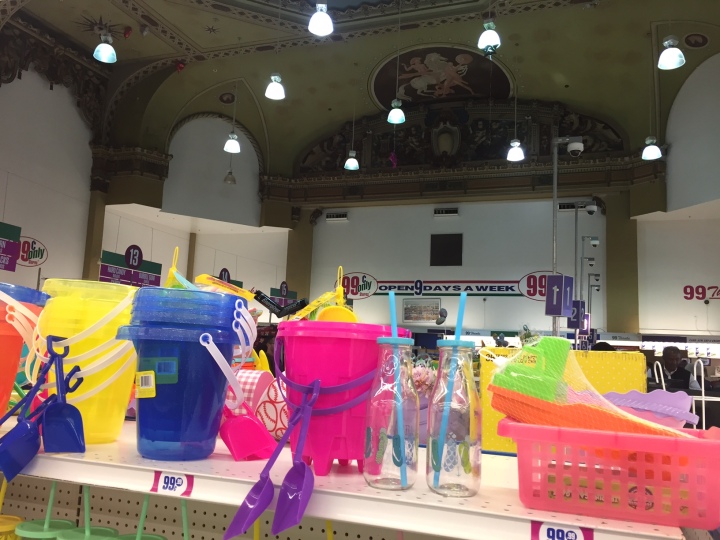 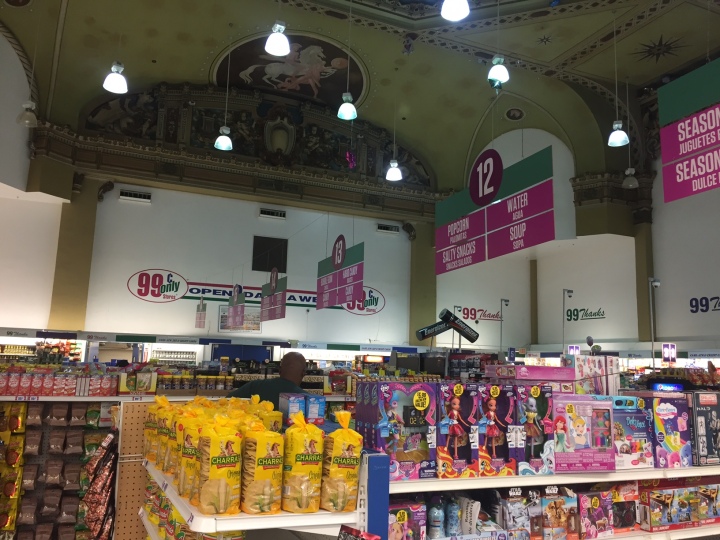 The 99 cent store does its best to grab you, balloons and batteries scream for your attention, but look higher, and you can regard naked cherubs, or warriors on horseback heading to battle. It is stupendous. 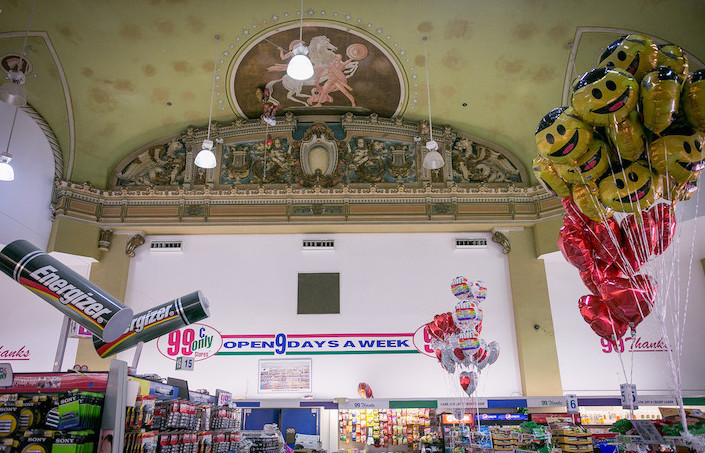 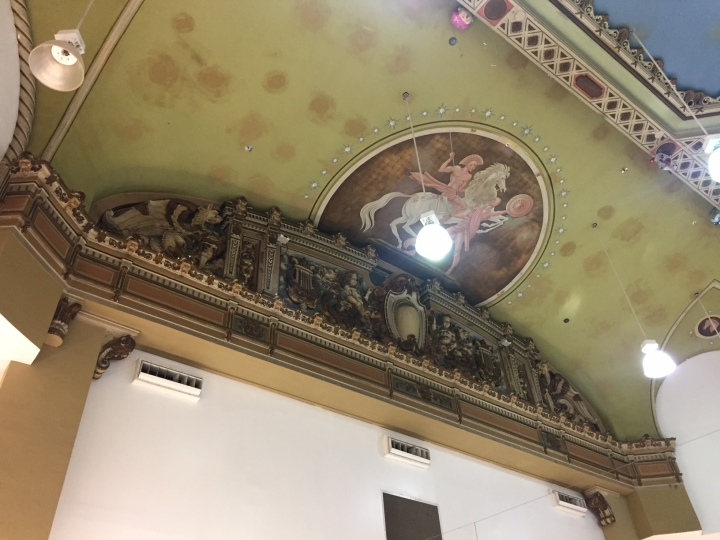 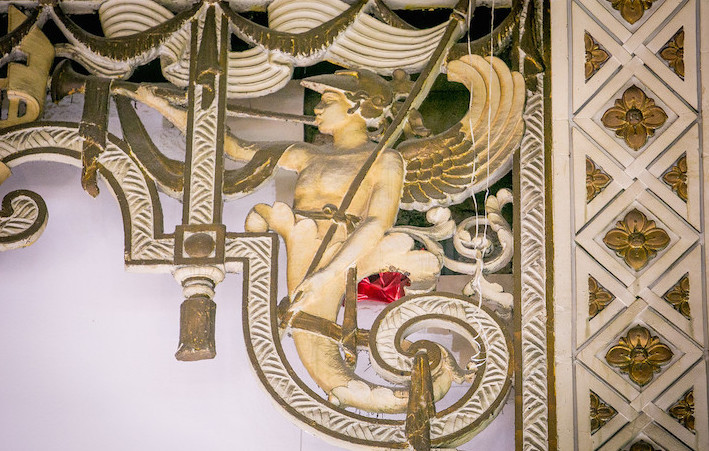 In the 1920’s, the Rialto  was yet another palace to escape for an afternoon, today its aspirations are more about the here and now.  The temptation of course is to turn one’s nose up at the 99 cent store. But it provides a valuable service in this community of mixed incomes, and, frankly, their ain’t no difference between the Oscar Mayer Bologna here and up the street, except the price. During lean times a few years ago, I was a regular customer. But back in the 20s, people didn’t come for the Bologna: 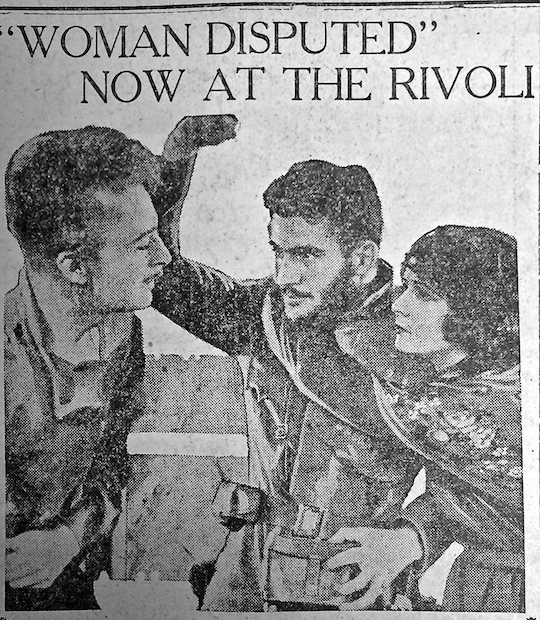 As I waited to check out (you bet!), I glanced up at the very top of the ceiling, and regarded its vibrant jazz-age era cinema decor festooned with  21st century commercialism. The  smiley-faced balloons, prevented from exiting the building, resigned  to gradually lose their air whilst regarding this magnificent mashup of cherubs and cheddar cheese, all of course, on sale for 99 cents. 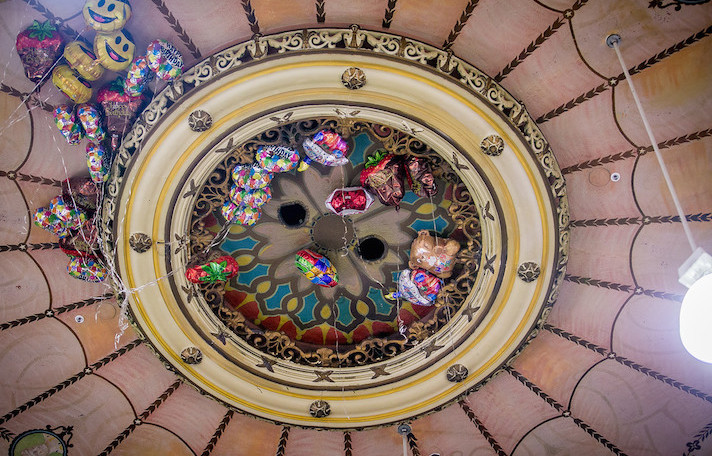