Is there a stranger sensation than coming upon a large body of water in the middle of a desert. The sight of Lake Mead suddenly appearing after hours traversing the lonely Nevada alkali, or Lake Powell emerging from the Colorado Plateau, studded with pontoon boats and jet skis. And then we have our own version, here in California: 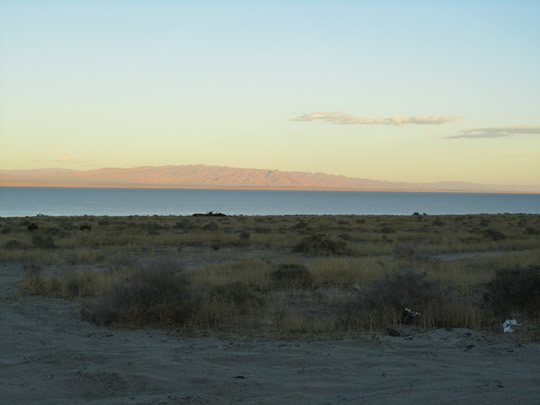 Its surprising how unfamiliar many Californians are with the largest body of water within the state; the Salton Sea. Last month, while down in Palm Springs, I spent the day out near the Salton Sea, a truly bizarre and beautiful place. The Sea is an accident- it was formed in 1905 when the Colorado River, swollen from rain and snowmelt, overflowed the headgates of a canal, and flowed unimpeded into the Imperial Valley and the Salton Sink. The water flowed into the sink for the next two years , thus creating this massive new lake. Here’s the map, and you can just see the Colorado at the far right: 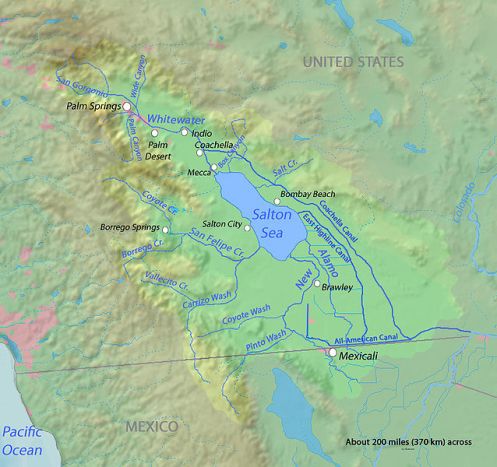 This vast new lake soon became a target for development, and a vast recreation mecca was dreamed of, and began to be realized. Huge developments along the north and east shores of the sea were planned and developed in the late 50’s and early 60’s. One can only imagine the optimism as developers envisioned the booming metropolis to the east sending a steady stream of recreation enthusiasts east to these new resorts. 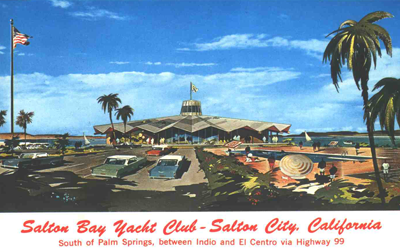 These developments came to partial fruition just as it became apparent there was something terribly wrong with the Sea. The only source for additional water to sustain the sea were highly saline creeks and washes, themselves largely agricultural runoff. As a result, the salinity and toxicity  increased astronomically, resulting in large-scale fish die-offs. Thus, the resorts very short moment in the sun was over, and they began a steady decline. Today, a tour of these locations is reminiscent of other desert outposts that we have visited the last couple of years, where owners and developers simply walk away, leaving whole buildings to be preserved in this briny wasteland. The result was, and is, a bizarre , salt encrusted and oft-malodorous stew of scrappy communities living on the edge of the sea, amidst dead fish and these abandoned resorts. Here are a few photos that tell the generally sad tale near the Sea: 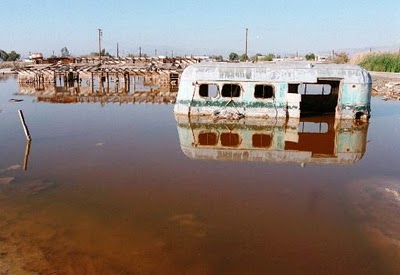 The rusted resorts along the north and east are perhaps half inhabited, weathered bungalows alternate with trailers and vacant plots. Over on the east side,  old agricultural towns such as Niland, slightly off  shore and on the main road and rail lines headed to the Mexican border, present a slightly less desperate feel. Yet a walk  through Niland quickly reveals a more robust past, as several very fine deserted commercial buildings in the center of the town attest: 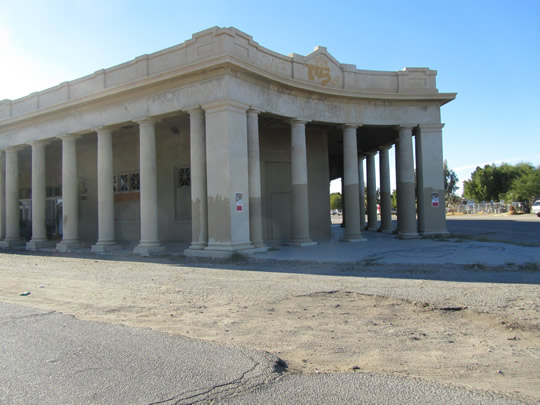 It is beyond Niland however, heading east into desert nothingness, that things really get interesting. A few years ago, I happened upon the movie “Salton Sea”. It revolves around a shady world of meth dealers and manufacturers living on the edge of society, out here.  I wanted to see the place for myself, because I heard there was a place called Slab City, where drifters camped out on abandoned concrete slabs.  I imagined a  lawless place of drifters, at once frightening and exciting, a place where Truth goes to die apparently:

A bit of background is in order  about Slab City. The “city” is a series of concrete slabs left over from an old marine base that was abandoned after World War II. Several veterans stayed, and the settlement gradually grew. There are both full-time residents as well as  a number of “snow-birds, which make their way here every winter. Yes, out here, on the slabs, scattered out as far as the eye can see, you find many living on the edge. In some cases, the lodgings seemed very temporary as if the inhabitants were passing through. But more often, I found residents who had  adapted to their environment, recycling found objects in ingenious ways. I thought of the animals that survive out here in the blast furnace heat, tough outer shells, and amazingly resourceful with their few resources. And while it was likely there were a few unsavory residents, it occurred to me that this was no different from any community. And this was a community. There is a ‘town center’ with bulletin board, a music venue, recreation, and rules and regulations. Here’s a few photos.

There is small mountain that sits hard next to the entry to Slab City. But this is no ordinary mountain, because you see, it was built by hand. Its called Salvation Mountain, and for the past 25 years, Leonard Knight has been building this monument.  He originally tried to build a giant balloon that would have been regaled with religious themed messages for all below. After years of trying , he finally was forced to give up on his dream. That failure occurred here, near Niland. And so he decided he would build a small religious monument and move on, and continue searching for his calling. And that was 25 years ago.

He, like his Slab City cohorts, finds his raw material in the desert. He builds frames with branches, and gradually builds the walls up with a mixture of clay and straw. And oh yeah he paints the mountain, thousands and thousands of gallons of paint have been applied, adorning it with quotes and exaltation.

Once inside the mountain, you are overwhelmed with color. It made me think a bit of Gaudi, (the Spanish Architect) both in form and color. Here you get a sense of the work in progress.

Leonard is a visionary, and a fine example of the American folk artist, the type you run across repeatedly in remote parts of the west. While he happened to these parts by accident, he stayed, recognizing the inherent opportunity. This place has space, and in that space, it allows for people like Leonard to follow their muse. Nope,  zoning regulations I could find. Sadly, the day I was visited, the creator was sleeping. This is where he sleeps, and lives.

I spoke with one of his assistants. We talked about the structure, the challenges of buildings roofs out of mud, of finding materials, of living out here in the summer. Not for everyone, but clearly this group of devotees were where they needed to be. They gave me a cd about Leonard and the Mountain, they accepted donations. Here is a link with more information on the place.

As I got in my car and headed north, I thought about my preconceived notions about the place. It is easy to dismiss this place as a wasteland, but  I met people here who genuinely liked living here. It was nothing like I had imagined after watching the movie. The residents here have clawed out community in their own way. And they anxiously await the future. Plans are inching along to try to restore the Sea, but it is controversial, and the competing interests; government, resident, agricultural, are battling it out.

As I headed back to Palm Springs, I couldn’t help but think  of the stark contrasts to those more well-known spots, all manicured and perfect.

No, it seemed to me this place, contrary to our movie poster above, was more truthful than the above photo. At least true to the hard nature of this place as a place to inhabit. It  crushed the unrealistic dreamers who tried to tame this unnatural place into a recreation paradise, but embraces the visionary who travels out into the desert in a beat up jeep, searching for branches, sticks and straw, in order to build his mountain higher.