It was time to get away. A recent gig completed, and the current job picture still rather absurd,  it seemed like a good time for a Roadtrip. This trip was a bit more ambitious than last year’s. It again included a trip into the Mohave Desert, but also stops in the Grand Canyon, Las Vegas, and back in California; Big Sur. This is part 1 , the trip en route to the Grand Canyon. This segment takes us south from San Francisco, through the Mohave Desert and into Arizona, traveling long stretches on old Route 66, through the requisite abandoned places, scrappy enclaves of artists, and some of the delightful oddities of Route 66.Here is the Mohave Desert /Route 66 segment of this journey, (click on it for larger view):

Our first stop took us to California City. It sits in the high desert, north of Edwards Air Force Base. What, never heard of it ? It’s actually  the 34th largest city in the country in terms of area. So why visit a place that, per the map below, looks like just another sprawling bland suburb: 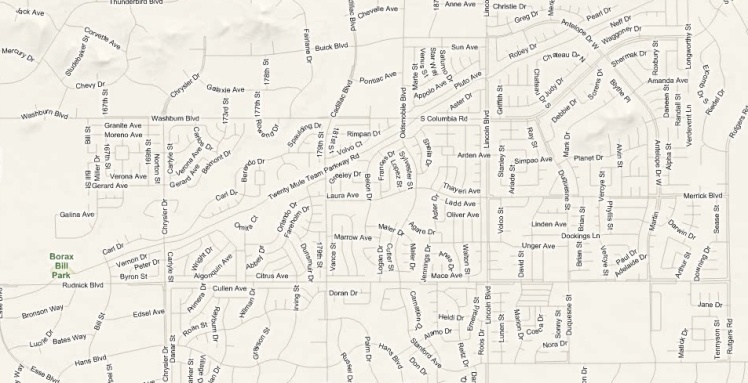 The reason for the visit is that it hasn’t quite turned out that way, here is what it actually looks like from the air. The streets are there, but nothing else- click on the photo to see a larger view: 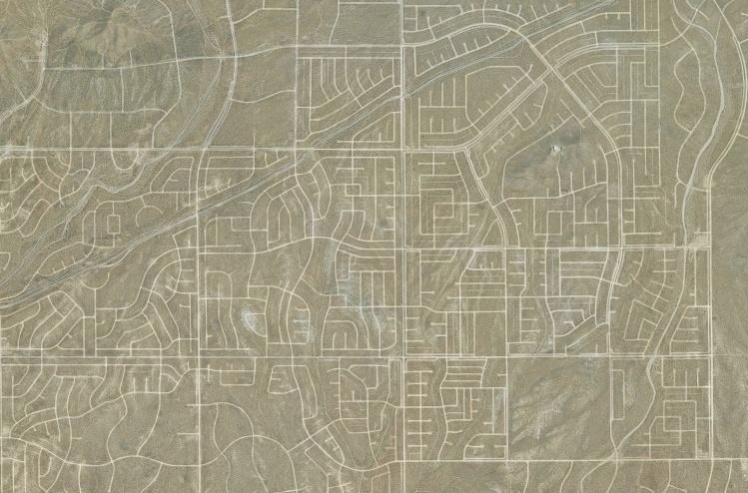 In the 1950’s, a Los Angeles developer and sociology professor purchase 80,000 acres of the California desert to create a low-density ,utopian model city, intended to be eventually the third largest in California. It never grew to near this size, but a town of about 10,000 does exist here, largely inhabited by employees of nearby Edwards Air Force Base. But a drive into the desert nearby reveals a bizarre landscape of crumbling roads  and street signs, with the only landmarks beyond the occupied part of town , a prison and a Honda Proving Ground. Here are a few photos. Note the first photo, from the inhabited part of town: a man riding a horse down the four lane street, just appeared to be heading to the store…. in the bike lane.

Route 66 and the Roadside

In the first half of the 20th century, a number of 2-lane cross country roads were created, the precursor to today’s freeways. These roads often had names such as the Lincoln Highway or The Old National Trails Road (nicer than the I-95 Ring Road). A portion of the latter road eventually became Route 66, of course the most well known. Many of these roads were gradually replaced by interstates that often followed the same path as the original, and at best, many of these, if they exist at all, are but short sections of frontage road.

Last year , we followed Route 66 through the LA metro area, in search of old roadside attractions otherwise  subsumed by the suburbs. This year, we headed into the desert on 66.  Starting in Barstow, one can head east on the road, and it eventually  veers  delightfully away from the main highway, where one can enjoy relatively uninterrupted  stretches on these lonely and often ill-maintained roads.

The roadside remnants of this time attest to a different, slower pace of travel. The roads were narrower, the buildings were built very close to the road, often with a welcoming canopy out front. They also occasionally included roadside attractions, such as teepee styled motels, or some exploitation of an often rather dubious natural attraction (see the amazing bottomless well!- or ancient mummified giant!!). Small, self-sustaining settlements were spaced closer together, as distances between stops was shorter. A trip along this California stretch of 66, as well as other nearby roads, passes a number of these roadside stops. When the  new freeway was built miles away, they were abandoned, and somewhat unique to the Mohave, they often were just left intact. Under the broiling  desert sun, the elements gradually strip away pieces of building, and  their iconoclastic invitations to the mid-century traveler gain a weathered patina. A few snapshots along Route 66, and a short side trip to “Santa’s Land”, a surreal little collection of buildings just off 66 in Arizona.

Route 66 in California converges with the interstate in Needles, California. (I’m not sure there is a town that is more aptly named, the name just feels hot). Needles  has always been a bustling town, and  unlike the above hamlets contained a much more elaborate stopover, for both rail and auto- a grand old train station / hotel. These were developed by Fred Harvey, and were known as……. Harvey Hotels. These were elaborate edifices (also a Moroccan influenced one in Barstow), and were staffed by the “Harvey Girls”, well known enough to spawn a 1946 movie starring Judy Garland (and Angela Lansbury?!). These girls came about because Mr. Harvey was appalled at the treatment of the previous all black staff by the white hicks traveling the rails. So he hired young, single women who were required to sign on for a year contract- could not marry, 10pm curfew, etc. Judy Garland was probably young enough…….never mind. Anyway, the glorious buildings remain, in Barstow partially used as a museum and station, in Needles, it sits empty. And if you listen closely, you can almost hear Judy singing………. 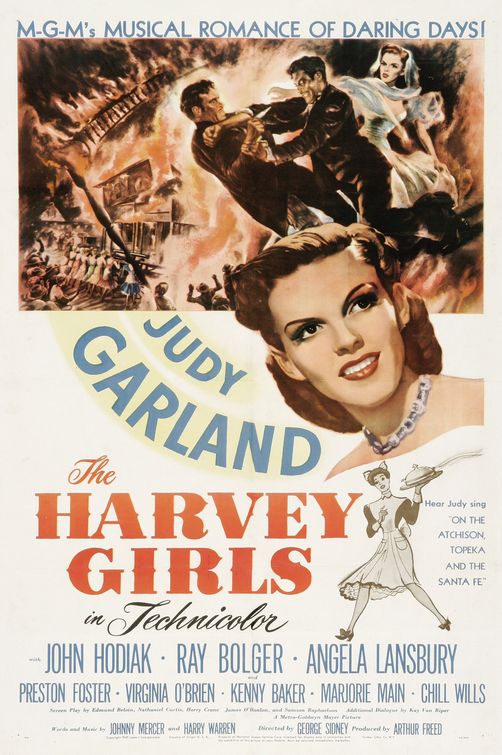 The character of these backroads changes in Arizona. As the Mohave Desert gives way to the mountains of Arizona, so to does the tendency to simply up and leave. There are fewer ghost remnants here, and those that remain, have been turned into tourist destinations. Once through the general horridness of Kingman , one ascends the craggy red mountains, and all at once happen upon Oatman, a real tourist trap, complete with fake gun fights and tourists run amok. To the east, in Seligman, a celebration of the more recent past. This town is about all things Route 66, and it was flocked with French tourists (who we kept running into on this trip). Seligman has a couple of great roadside buildings and motels.

People do live out here, in towns such as these and the one shown below in Chloride, Arizona, (as well as California). In fact, some of the most interesting of these are towns with a new purpose such as Chloride, old mining towns that gradually become artist enclaves, and we saw several of those en route. It takes a hearty, and sometimes a quirky soul, to live out here- I once stayed in a motel in such a place-and it was  run by a combination of the Outlaw Josey Wales and Aunt Bee. I’ve noticed that artists often gravitate to the wide-open spaces, perhaps attracted not just by the space, but the inspiration of the contrasts, such as we again see at nearby Santa’s Land and its neighboring billboard. 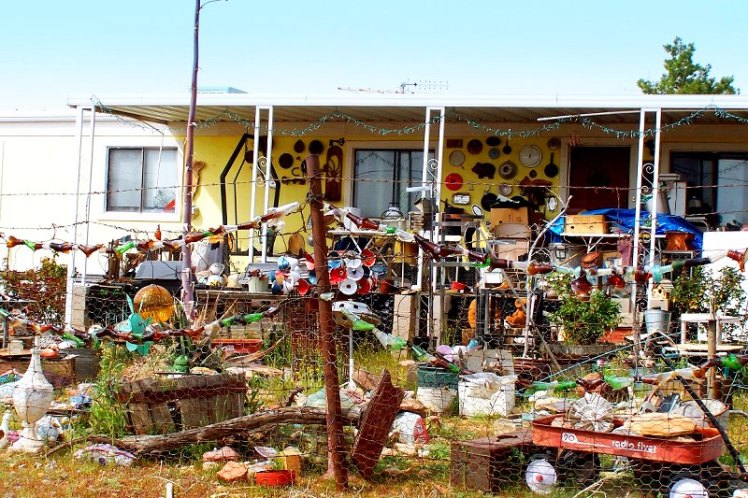 As you can guess, I am fond of these places, and will ruminate more on that as the journey continues. For now, I wanted to leave you with a final delight of driving along this stretch of road : the re-emergence of the old tradition of the Burma-Shave sign. These signs , originated by that company, are poems spread out over 5 or 6 signs, here, admonishments regarding safe driving. Next up, a plunge to the depths of Grand Canyon- enjoy: