Ghosts, and there are many, abound in Buffalo. They are alternatingly beautiful and heartbreaking. This a brief tour of some of what I saw, with some thoughts on the future.

The old waterfr0nt in Buffalo was the engine that got things rolling in the 19th century. Well into the 20th century, ships with cargo from Midwestern cities would travel the Great Lakes, unload in Buffalo, and then the cargo would be later shipped by train or canal to  East cities and beyond. The grain elevators, invented in Buffalo in the 1840’s, were basically large storage containers for grain  on its way to a final destination.

It must of been quite a site in its heyday. In the early 20th century, the French modernist architect Le Corbusier, who among other things, popularized those  glasses he’s wearing, came to the US and marveled at the industrial beauty before him, simple machine-like forms at a staggering scale. It had a profound influence on him. 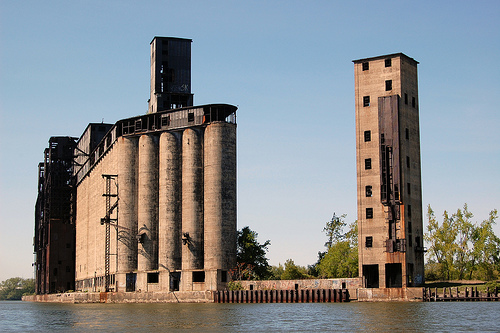 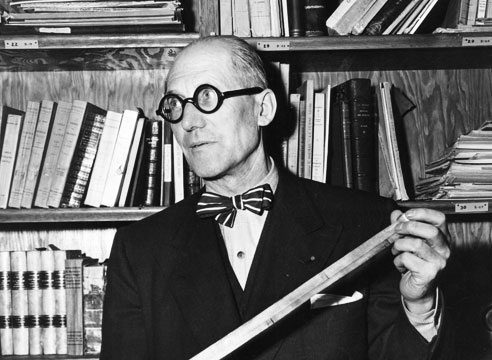 Things changed for good in 1959.  The St. Lawrence Seaway was opened , and with that, ships now could bypass Buffalo, traveling directly the Atlantic. The waterfront went into decline. Many of these incredibly stout concrete towers remain, a few are still in use, but from what I can gather, most sit empty. I was also struck by the close proximity to a residential neighborhood. I wonder what its like to live in this house. 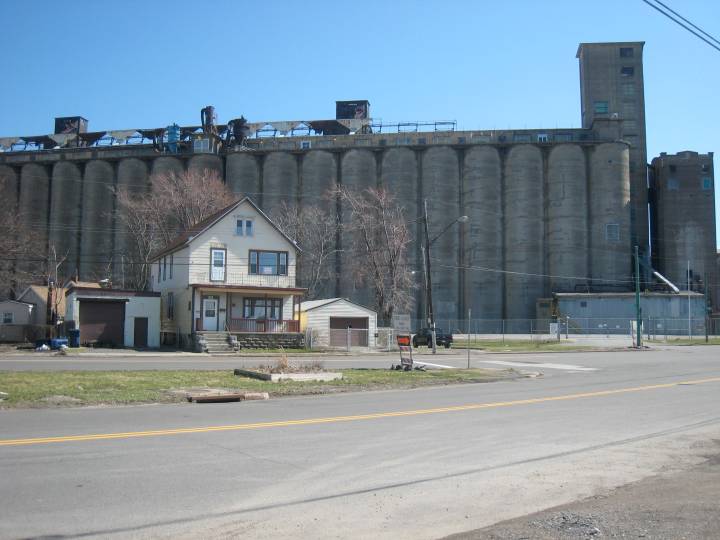 This was the main train station in Buffalo. It closed in 1979, and has sat empty ever since. It has become a popular destination of urban explorers who wish to explore its vast halls, and old offices. The building is in an odd location, far from downtown, in the middle of a residential neighborhood. It towers over the nearby houses, and that only adds to the otherwordly quality of this building. Many efforts have been made to try to revitalize the building; the latest pin hope on a high speed rail line that has been envisioned, connecting all the upstate New York cities with New York City. Admittedly, that’s a long way off. 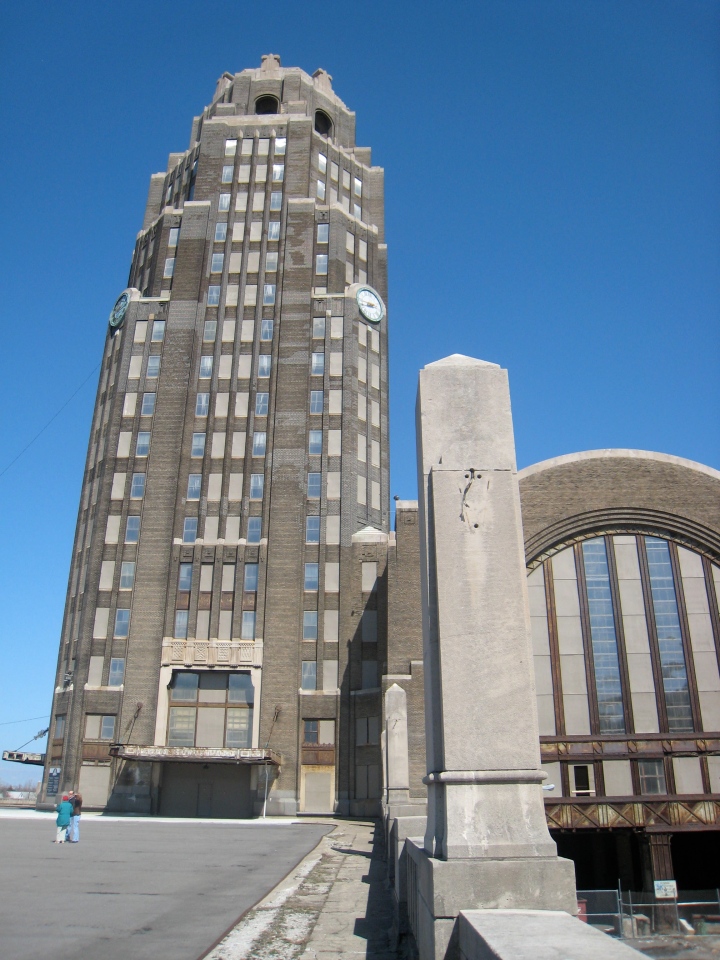 In the meantime, it attracts the occasional special event, some of us wanderers who find the complex mesmerizing, and, from what I could gather, a few people who may make the building home. Looking down at the expanse of train sheds nearby, I could see figures moving. Then, I started to hear the most bloodcurdling howling, is that human? There was a guy nearby who , well, I wasn’t sure what he was doing, he was loading his pick-up with junk. I looked at him when I heard the screaming,- should we call the police? He told me that was just some crazy guy who lived like an animal in the sheds, and pay him no attention. It was jarring.

Finally, I have to share some photos of the inside, there are many on sites like flickr. The building was well locked and guarded the day I was there.  These particular photos are extraordinary, obviously a very gifted photographer, unlike me with my pinhole camera. 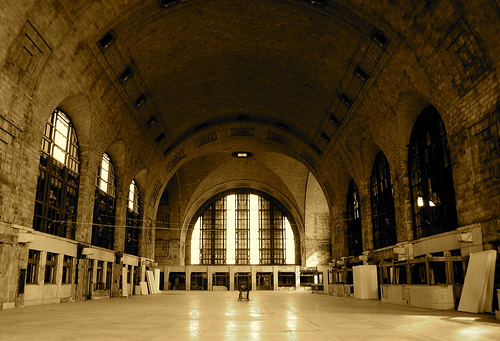 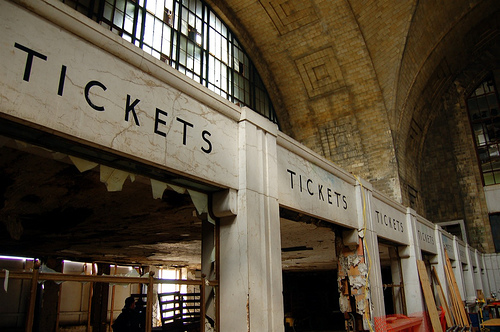 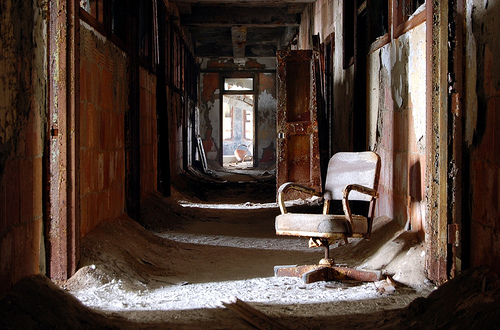 Here’s a couple of more ghosts. On the left, Buffalo’s old grande dame hotel, the Statler. Across from City Hall, it closed in 1984. There have been a number of attempts to redevelop the hotel, mainly as offices. It is only 10% occupied now with offices. It is just astounding, living in the west, to think of such a large building , in the heart of a city, empty for 25 years. And on the right,as we saw previously, the State Hospital, it too awaiting anew life. 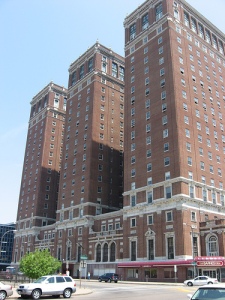 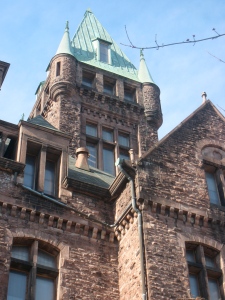 Of course, these large edifices are just part of the story. The bigger story is this city has HALF  the people it once had,  and so, when driving around town, you see a lot of these scenes. It breaks your heart. 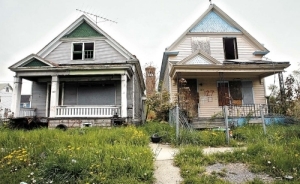 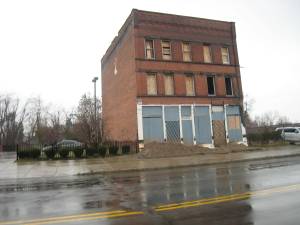 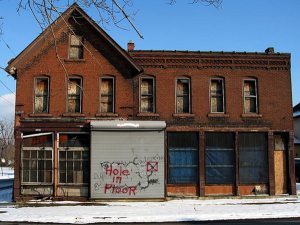 How to plan for a shrinking city? Many northeastern and midwestern cities face a similiar plight. Many neighborhoods have as many vacant or abandoned properties as they do occupied ones. What to do? Several cities have become more proactive with a practice called land banking, where the city takes the distressed properties, and forms a  larger contiguous plot- banked for future development. Here’s an excerpt from one neighboring city’s efforts: 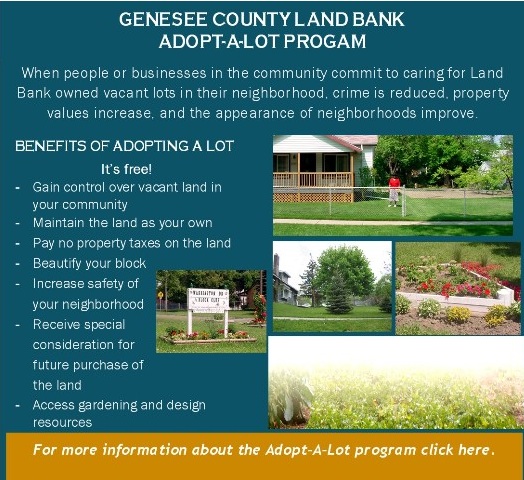 Here was an article that ran the other day in the NY Times about how Flint, Michigan is proposing to deal with the problem, closing and removing whole neighborhoods:

Meantime, there is some infill going on in Buffalo, but I  saw some bizarre suburban homes plunked down in the middle of the city.  They looked so out of place, I wondered if they were geared toward the  palate of suburbanites considering moving to the city. It seemed a shame to see those new homes  next to abandoned homes, but repair and renovation of old homes can be tricky to make work in places with too much land and such low prices. But the government’s stimulus plan is having an effect. This what the Recovery Act looks like on the ground. 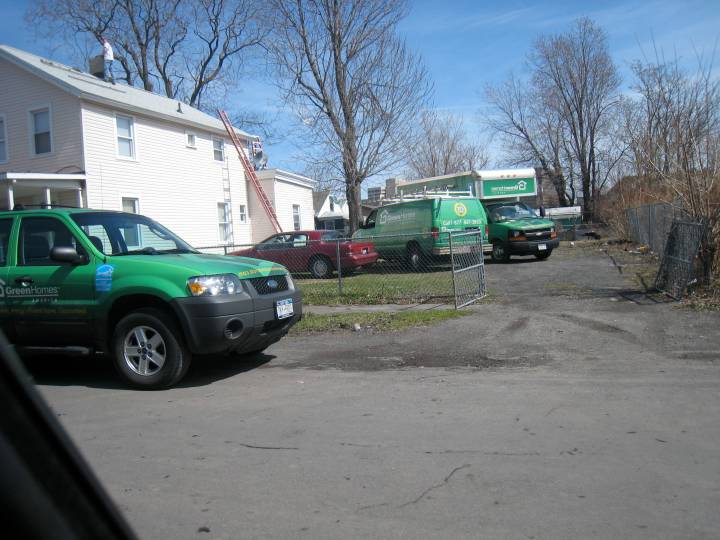 Speaking of sustainability, there is also some who   have suggested creating urban farms on vacant land, which could have promise, particularly as a temporary solution in conjunction with land banking, although with all the infrastructure in place, that’s some pretty expensive farmland long term.

The reality is that there are more buildings and land than demand, so it could be  an all of the above solution. Finally, there is also the role that Architecture (capital A) can play in the reinvention of a new urban fabric,  in its promotion of overall civic pride, that is, creating new buildings and landmarks that make people feel excited about the future of the place. And their is plenty of new buildings being built in Buffalo. Here’s a trio; a new visitor center at the Martin House by Toshiko Mori of Japan, a new Gwathmey Siegel designed Museum housing the works of the Buffalo watercolorist Charles Burchfield, and the new KPF designed federal courthouse, right across from our hotel. In addition the University of Buffalo is planning on moving its medical and dental schools downtown, which will give downtown a vital shot in the arm. And of course, there’s the potential for high speed rail and the re-use of the Buffalo Terminal. 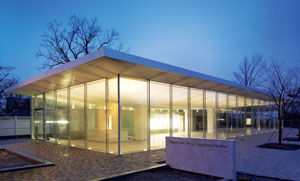 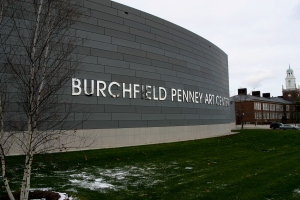 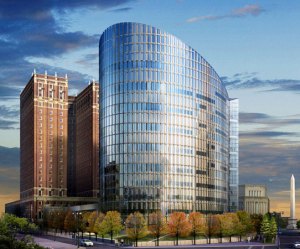 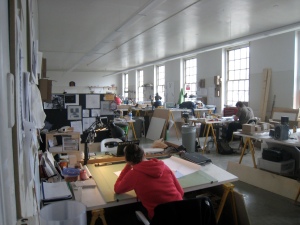 My last stop was the School of Architecture. (Talk about ghosts, been a long time since I was here). But I was envious of the students, what a great time to be here, at this school, in a place that  has unlimited potential, a veritable laboratory at your doorstep. There is an incredible creative energy in Buffalo, and against some long odds, groups of dedicated people have worked over the years to preserve landmarks, create new buildings, and help create a compelling vision of the future for the city and the region. I am confident the city’s best days are ahead.

4 thoughts on “Buffalo Tales- Part 2: Ghosts and the Shrinking City”