A couple of week’s ago, we celebrated my Dad’s 90th birthday. The celebration was in the house I grew up in, in the little town of Camillus, New York outside Syracuse. Now technically, this photo is from his 89th birthday last year, but I really like the photo. So that’s him- and does he look 89 to you? That’s my Mom on the left. and they have been married nearly 50 years. They had two children; my sister Sue and myself, and those are my sister Sue and husband Bill’s 3 wonderful girls.

So, what to say about my Dad.

Well first I suppose, his name is Leo. My Dad’s life has spanned an extraordinary time in this country’s history. Backing up a  bit, my Dad’s ancestors all came from Ireland, settling in Central New York as part of the influx of Irish immigrants working on the Erie Canal and related industires of upstate New York in the 19th century. Here is his mom’s family, taken about 1900, she’s the second from the left- Kitty, short for Catherine. His grandmother ran a boarding house, she is the rather stout woman in the center

Dad was born in 1919, he was the 13th of 16 children. Yes, I said 16.  The family didn’t have much, but they got by on the largely Irish west side of Syracuse. My Dad’s brother Wimpy was known to say that when leftovers were offered up by their saintly mother Catherine, you needed to call for a fair catch to receive them.

My Dad grew up during the depression, was then one of the first in the area to volunteer for service in World War II, and served proudly. Dad enjoyed what may have been the halcyon days of Syracuse in the 1950’s , a successful salesman, avid golfer, and devotee of the ballooning success of the local football team, our beloved Orangemen. He then met my Mom, and the rest, as they say, is history.

My dad worked hard in the 60’s, as I think these photos attest, a bit of relaxing after a hard day, then back to work, repairing some kind of appliance. My Dad was always a bit of a tinkerer, and when we bought a home outside the city, he finally was able to create a proper work area, from which launched thousands of home improvement projects. I think this definitely rubbed off on me as I moved towards the building business. Together , he and my Mom  provided my sister and myself a great childhood. 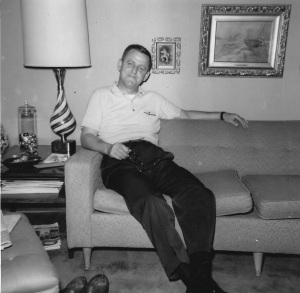 There are of course, endless memories to share, but a couple stand out. In the 70’s, as a young teen, I can remember joining my father downtown, perhaps it was  a dentist appointment, or heading to a sporting event, but about every 20 feet it seemed, someone would call out my Dad’s name- “Hey Leo!”. Everyone knew him; and everyone seemed to really like him.

And the sporting events. My Dad took me to Syracuse basketball and football games growing up. Just me an him. These were some of the best memories I have of growing up in the 70’s. It was awesome. I remember, as we would sit outside and watch what was generally a not very good football team back then, there was a man in front of us each week who would smoke a big fat cigar, every week, win or lose. To this day, when I smell a cigar, I am back there for a moment, without fail.

On his birthday last week, I took him up to the University. We were there to visit a statue erected in honor of Ernie Davis, the great Syracuse football player, the first African-American winner of the Heisman trophy, (awarded annually to the best college football player in the country). He was the subject of the 2008 film “The Express”. My dad saw every game he played a Syracuse. It was a cold, grey, windblown day, but we made it, and here he is. It was a good day.

My dad has lost most of his eyesight, but can still get around. And he has not lost a bit of his mental accuity, his memory is amazing , and he still does crossword puzzles verbally every day with my Mom. I think over the years, my appreciation has grown over how much he has achieved in his life, particularly given the early years. In comparison, we have so much to start with now, both back in the 60’s, and even more so today.

One of the great benefits to having some extra time on your hands is to be able to do things like take several trips back east to spend more time with family. This was a week I shall not forget. Happy Birthday Dad.